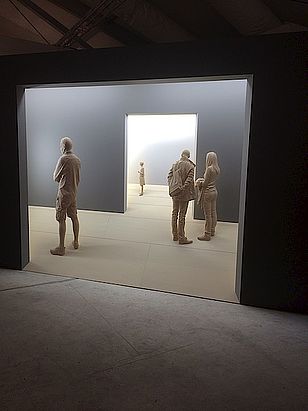 More than 150 participants from Germany, Austria and Switzerland discussed at the 4th Cologne Art Insurance Talk.

Cologne, 17 April 2015. Art Cologne (16-19 April 2015) is not only one of the largest international art fairs for contemporary art. It is at the same time a testament to acquisitions and disposals of enormous value. Around 200 galleries from all over the world exhibited at the Cologne fair. The subject of loan traffic plays an important role - in all its risky facets for lenders, borrowers, forwarding agents and insurers. Much can be done to protect cultural assets from damage through the prudent use of technical means. But residual risks remain and need to be insured.

Year after year, the insurance industry shoulders billions of euros so that institutions can make art and cultural assets accessible to a broad public in accordance with their educational mandate. But is the benefit to society worth the risks taken? Where are the limits? How are these risks distributed and can they be cushioned, passed on or even avoided?

Two expert panels answered the participants' questions and drew lessons for the future under the expert moderation of art journalist Stefan Kobel.

Art worth more than 250 billion euros is moved every year

Background: In 2014, the global art market recorded a turnover of more than 51 billion euros, which is based on a good 36 million transactions. Each individual transaction usually involves at least one transport. In addition, the focus of sales has shifted in recent years from the USA to new markets in Arabia, China and India - and with them the exhibition venues. This implies longer and hitherto unknown transport routes.

There is no official data on loan traffic. Host Dr. Stephan Zilkens from the art insurance broker of the same name makes the following rough calculation: On average, 220 galleries exhibit at a fair of international standing. Each of them shows about 50 works at a sales price of 50,000 euros; per gallery, therefore, a total value of 2.5 million euros. Per fair, the art values thus add up to 550 million euros. Every year, about 180 such art fairs take place around the globe. That adds up to a movement potential of around 100 billion euros a year. However, trade fair traffic is not everything. There are also the works lent to exhibitions and museums. Here, taking into account 20,000 museums listed in the ICOM association, each with three exhibitions per year, each with 120 exhibits, Dr. Zilkens arrives at more than 15 million deliveries and removals worth an average of 20,000 euros, already an annual movement volume of 150 billion euros worldwide.

An end to the touring trend is not in sight for the time being. There is far too much capital in the market for that. In view of the persistently low interest rates, it is fleeing into tangible assets such as real estate or art. Against the backdrop of the aforementioned regional shifts in the art market, the rising demand poses new challenges for all parties involved. Starting with the art objects themselves, whose greatest danger, according to experts, lurks in transport. For Eric Wolzenburg, head of art insurance at Allianz Deutschland, the loan business has its limits: "Here, the need for protection must be allowed to outweigh marketing and educational interests."

For forwarders, an old but apparently still practised rule is added to the problem, according to which art is insured at a low price at home and at a high price on the road. With the values, the potential liability for them gradually grows into a problem that threatens their existence. It is true that the legal liability of freight forwarders in Germany is limited to 8.33 special drawing rights per kilo of cargo, which currently corresponds to about ten euros. But the limit only applies if no gross negligence or even intent was involved. "We are the last link in the chain to be taken into recourse if we are not careful," warns Hans-Ewald Schneider, head of the renowned Kunst-Spedition Hasenkamp. He also bears the burden of proof in case of doubt.

Cost pressure despite explosion of values

Art insurers also have to document their processes in ever greater detail. In order to survive in competition, they also keep expensive experts on hand. The customer has become more demanding for years. At the same time, premiums are under pressure from international capital. So the rising prices for works of art are only one side of the coin. The other is rather conspicuous by its absence of money and willingness to pay. Thus, the representatives of the insurers agreed with those of the hauliers that in the end, tenders are less about quality than about the cheapest price.

On top of that, customers often leave their insurers and freight forwarders in the dark about the basis of the contract: "The freight forwarder usually does not know the lease contracts and conditions," says freight forwarder Schneider. And the insurers are no different: "We don't know the loan contracts in the vast majority of cases," admitted Eric Wolzenburg, head of art insurance at Allianz Deutschland. Gallery owner Beck from the Düsseldorf gallery Beck und Eggeling and Tina Köhler from the Haus der Kunst in Munich pass them on to their insurance brokers for examination. Schneider thinks a good solution would be a kind of specification sheet in which detailed transport or insurance requirements can be written.

There is often a lack of communication among them, the participants agreed. "Trust, control and constant communication," for Birgit Vikas of the Austrian forwarding company Kunsttrans, "are the three fundamental factors when dealing with loans on the road." Open interfaces are a big problem. Sabine Falke, who advises the Ergo Insurance Group on setting up art insurance, is concerned with "understanding each other's needs, because this understanding is the basis for joint solutions."

"In the past, people knew each other and the exhibition venues. Over time, more and more private loans have been added with individual contracts drafted by lawyers," recalls Tina Köhler of the Haus der Kunst in Munich. For cost reasons, exhibition managers like her prefer standardised loan forms because then they don't have to have umpteen individual contracts checked by lawyers. They often don't have the time to do that.

Lenders have more power than they think. Dr. Lucas Elmenhorst from the law firm dtb rechtsanwälte, which specialises in art contracts, is not the only one who is convinced of this: "The lenders have all the power to dictate the conditions. They are just not aware of it, Till Fellrath of Art reoriented also reports.

So should lenders and borrowers in future first consult lawyers and brokers before agreeing on a loan? The answer depends not least on whether and to what extent the necessary willingness to pay exists throughout the entire loan chain. Because at the end of the day, the main question is whether a corresponding price is paid for quality that also allows for a margin, Axa-Art head Kai Kuklinski points out. Live and let live is the motto of sustainability - also in lending.