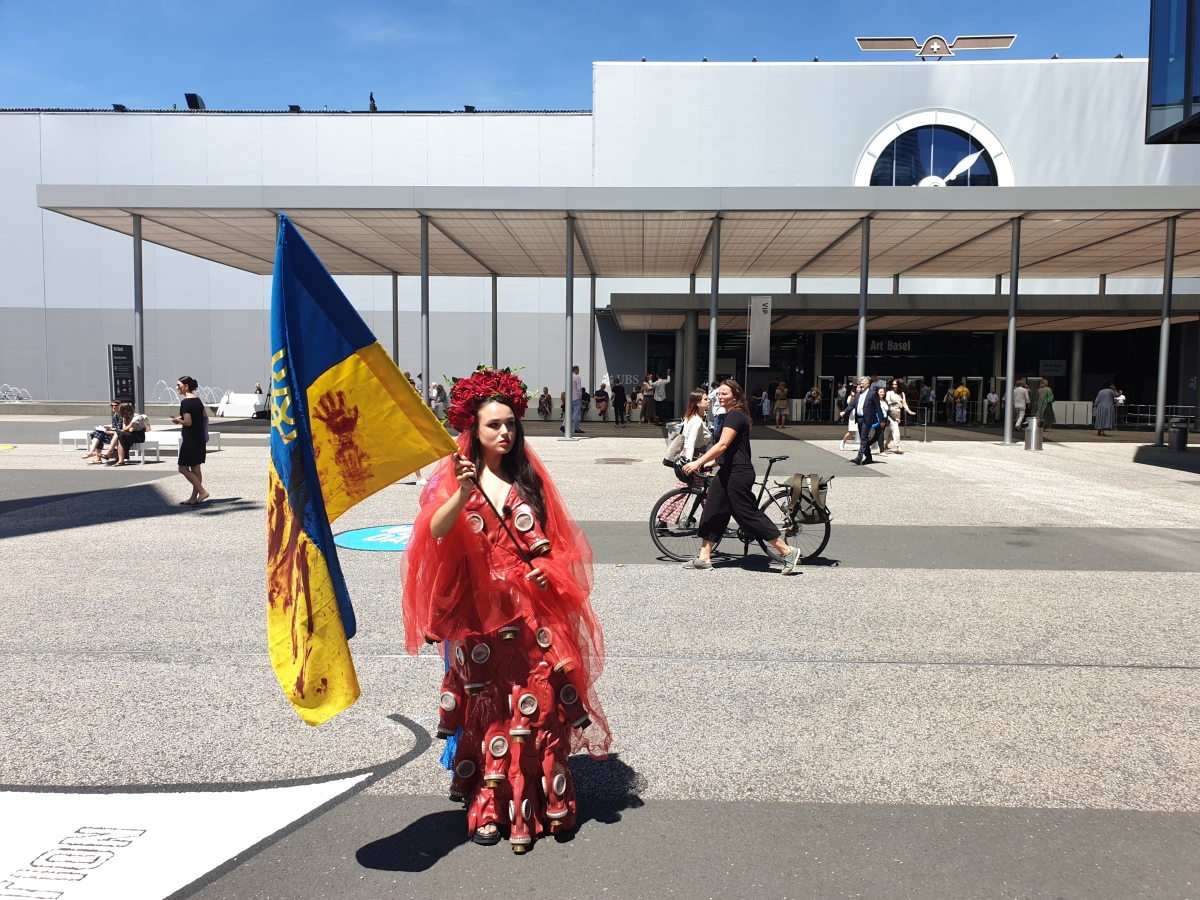 The art world's support for Ukraine is not only met with enthusiasm, Kabir Jhala and Tom Seymour found out in Basel for The Art Newspaper: "The wealth of initiatives in Basel providing support for Ukraine has proven that the art market can act in unselfish ways, and with speed. But others question why the art market's growing generosity is reserved for select causes. The industry's response to Ukraine is indicative of what I believe to be a hierarchy of empathy, which focuses attention on white Europeans above all others,' says the South African artist Adam Broomberg. A vocal advocate for Palestinian rights, he says the art market is 'terrified of mentioning Palestine and will never award success to those who are critical of Israel'."

The first post-pandemic Art Basel is assessed differently by the press. Ursula Scheer sums up in the FAZ: "The array of high-class art is once again enormous, as is the collectors' willingness to invest. Everything looks like 'business as usual,' but how much water Art Basel has under its keel economically is not quite so obvious."

In a larger context, Scott Reyburn embeds Art Basel for the New York Times: "War is raging in Ukraine. Stocks are down 20 percent; inflation is up more than 8 percent. The crypto economy is collapsing. But back in the bubble of the international art world, the wealthy, for the moment at least, appear to be on a spending spree. Following on from May's bumper two-week series of marquee auctions in New York that raised more than $2.5 billion, collectors were on the hunt for further desirable modern and contemporary works at the 52nd edition of the Art Basel fair in Switzerland."

In an argumentation that is not easy to follow, the Tagesspiegel of June 18 justifies the prices in the millions with the war in Ukraine. "Despite, or perhaps because of, falling stock market prices, art is more sought after than ever as a top investment and at the same time as a key value of Western democracy. [...] The collectors, museum directors, curators, advisors and artists who have arrived in pre-pandemic strength - predominantly from Europe, the USA and again from Asia - make decisions professionally and with commitment at the same time, and their means seem unlimited. In view of the Ukraine war, more and more investors are realizing what really counts. In this respect, even the work that commands the fair's highest price of $40 million, the 1996 'Spider' steel sculpture by artist Louise Bourgeois that spans Hauser & Wirth's booth with seven-and-a-half-meter legs, has already been sold to a European collection."

Marcus Woeller addresses structural changes among owners and visitors in the WeLT of June 17: "The management had apparently relaxed the previously very strict invitation policy for the preview days. Andrew Fabricant, COO of Gagosian Gallery, is surprised: 'I saw fewer established classical collectors than many young unknown faces, not the kind of experienced art world types,' says Fabricant in an interview with WELT. He believes new Art Basel major investor James Murdoch is heavily involved in this rebranding, 'to make the fair more youthful, more energetic.' He says it's a 'double-edged sword' to expand outreach to this generation but risk alienating discerning collectors. 'That could be a problem for the ultra-rich, discreet, very exclusive people who have always been the first VIP to come to Art Basel.' Still, the mood among dealers was good."

Kito Nedo addresses the weakness of the parent company MCH Group and its consequences for Art Basel in the Süddeutsche Zeitung: "In October, Art Basel, which already operates offshoots in Hong Kong and Miami, will then expand to the French capital under the title 'Paris+'. The crisis-ridden Swiss exhibition company MCH is thus taking flight in search of sales. One topic that is not being discussed, however, is what will happen to the exhibition in Hong Kong in the future. In Hong Kong, there is effectively no longer any freedom of expression and demonstration, and the Chinese government is attacking the opposition in the former British crown colony ever more harshly. How does this fit in with the freedom of art that forms the foundation of Art Basel? Spiegler did not say a word about that. But the fair will have to position itself on that in the near future."

Shanti Escalante-De Mattei added up the costs of participating in Art Unlimited for Artnews.

The self-staging of influencers in Basel has been followed by Raphaela Portmann for the Basler Zeitung. Kenny Schachter is missing, though.

At Art Basel I was for the Handelsblatt and Artmagazine.

Despite some sold-out booths, the market segment of the galleries represented on the list with its idiosyncratic hall plan is precarious, Stephanie Dieckvoss reminds us in the Handelsblatt: "Although many galleries show solo presentations, room-sized works like these are rare. This is not only a sign of the new environment, but also of the time when even the young galleries want to play it safe and try to recoup their high expenses through additional sales. Small galleries feel the economic uncertainty of the time very much. You can hear that from many conversations. We can only hope that, in addition to solidarity, the willingness of women artists to experiment will continue to be given space."

This is also a way to report on art fairs: "Exciting discoveries are what Volta, the youngest of Art Basel's three satellite fairs, holds in store for visitors. The discovery and excitement are likely to be mutual for newcomers making their first fair appearances here. Among them is Ishita Chakraborty." What follows is a portrait of the artist and not another word about the fair. To be read in the FAZ of June 18. Yet there is a lot that could be said about the Volta.

I took a look at Liste and other satellites for Artmagazine.

The way in which prices for and the valuation of art are currently created is alarming, warns art consultant Lisa Schiff at Artnet: "In this fan-based economy, art no longer has to be experienced physically or be historically contextualized. In fact, the object itself no longer matters, leaving only an image that signifies potential profit, nothing more. This should be an urgent call for debate. The potential death blow to a traditional mode of value-making should be of serious concern to anyone who wants to defend the true essence, power, and ability of art to inspire, educate, incite agency, and remind us we are human. There are four factors that embolden this crisis: the primacy of auctions, the breakdown of the evening sale, the expansion of art lending, and the emergence of a new form of appraisal."

Crypto-art pioneer Sara Meyohas herself warned of the risks of NFTs in an interview with Anny Shaw for The Art Newspaper: "This week Bitcoin has taken a battering, falling 25%, its lowest value in 18 months. The immediate trigger appears to be a massive sell-off by investors. Of the plunge in prices, Meyohas acknowledges the 'market downturn', but notes it is 'important to separate market concerns from the technology rails, even though they have of course enabled the creation of this market in the first place'. The knock-on effect for the NFT market is inevitable. As Mayohas puts it: 'We are entering a recession, and there is a flight to safety. It shouldn't be a surprise to anybody that easily traded JPEGs are not 'safe' assets.'"

Takashi Murakami has apologized to his fans over his failed NFT editions, reports Amy Castor at Artnet: "Unfortunately, Murakami's timing was terrible, and he completely missed the NFT boom. After spending a year fine-tuning the technical details of the project, he launched it right before the 2022 crypto crash. On June 8, a seemingly disheartened Murakami issued an apology on Twitter: 'Dear holders of http://Murakami.Flowers, I appreciate your continuing patronage, although the project's floor price and transaction prices remain stagnant. I am very sorry,' he said. The cheapest Murakami.Flower NFT is now 2 ETH ($2,200, at current value) on OpenSea. During a false start over a year ago, he was getting bids of upwards of $260,000. That's when he decided to withdraw the project and mull things over a bit more."

What belongs together comes together: The con artist Anna Sorokin aka Anna Delvey is planning to release NFTs, reports Mara Siegler at PageSix.

The auction of the Old Master collection of the Chilean collector Álvaro Saieh, who got into financial difficulties, turned out to be a flop, Barbara Kutscher reports in the Handelsblatt from New York: "Already shortly before the auction, 19 of 54 lots were withdrawn. This strategy is supposed to protect the market in case of low interest. Of the remaining 35 works, only 22 found buyers at a total of $19.4 million with buyer's premium. According to dealers, the lots had started with too high expectations. They were often based on Saieh's acquisition prices. A lot also came back on the market way too early."

Collector Heidi Goëss-Horten died last week. Nina Schedlmayer takes a look at the past and future of her collection in the Handelsblatt.