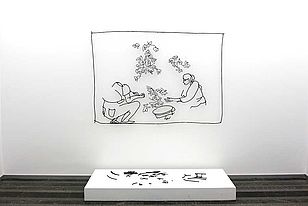 "Art insurance in times of uncertainty" is a rhetorical trick. The business model of any risk insurance is uncertainty. However, this was precisely what the 6th Cologne Art Insurance Talk by art insurance broker Zilkens Fine Art during Art Cologne on 27 April was all about.

The business model of insurance is based on the ability to make uncertainty measurable and calculable. With a worldwide premium income of an estimated 1.7 billion US dollars, art represents a relatively small segment in the gigantic insurance market. Nevertheless, it is attractive for floating capital in times of low interest rates. Reliable data and a dependable framework are therefore essential for the industry.

Nadine Oberste Hetbleck, from the University of Cologne, began by making it clear that research on the art market is still in its infancy. However, it is clear that political and economic changes have always had an impact on the art market, although it has not yet been possible to systematise or even quantify them.

Kilian Jay von Seldeneck from Kunsthaus Lempertz emphasises that investing in art not only carries an emotional dividend, but has also always been seen as a safe haven against state intervention. In the recent past, however, the activities of the legislator have led to uncertainty among collectors. As a reaction to this, his house will largely outsource its Asian department to the Brussels branch.

Daniel Hug, Director of Art Cologne, observes that collectors no longer like to travel. For the classical art trade, the internet is a factor of uncertainty because customers are more unpredictable. He does not believe that the measurement experiments such as those undertaken by the Tefaf or Art Basel reports offer reliable data.

Birgit Rolfes, a trained art historian, is now head of Mannheimer's art insurance division Artima. She points out that musical instrument insurance, which has existed for a good hundred years, can be considered the precursor of art insurance. Neither here nor there can she detect any uncertainty, only that some of her clients are reconsidering storage in Germany. This is not a mass phenomenon.

According to Rolfes, both her branch and the art trade in general are still at war with the internet. There is a need for training among professionals and customers alike.

The economist Kay Kuklinski is chairman of the board of AXA Art. For him, uncertainty has something good about it. He wants to provide security, so uncertainty is his business, he said. "We all have to do more to generate the same revenue [...] and we see less and less willingness to pay" to also honour the security of an insurance policy.

Collecting reliable market data is indeed a problem, he says. Oberste-Hetbleck points to the scientifically questionable basis of the relevant studies, which are largely based on own surveys with extremely poor response rates.

Instead of questioning the motives for his colleagues' tight-lippedness, von Seldeneck prefers to look at the issue in the abstract and points to the disparate and partly contradictory developments of individual sectors and regions. There is also uncertainty in the change of taste over time. In order to keep collections dynamic over generations, he recommends, among other things, the services of his company: buying in the primary market, selling in the secondary market, in order to invest the proceeds again in the primary market.

Hug reports of collectors who even hope for a crash in the market for contemporary art so that they can afford more art again when prices are lower. If one understands uncertainty as fluctuations in fashion, the perspective would be quite different. Seen in this way, uncertainty would offer opportunities because discoveries could be made cheaply in neglected areas. On the other hand, in the multimillion-dollar sector, super-rich individuals decided on success or failure when they bid on a top work or not.

Oberste-Hetbleck points out that the players active in the market certainly have an overview and only a slight interest in making their industry more transparent, predictable and thus safer for outsiders.

Spectacular bankruptcies like that of Auctionata are not surprising for insiders, but have the potential to unsettle customers. Daniel Hug believes that the business with art on the internet will change massively because the internet will be completely different from today in the near future. The future will include works of art arriving via the internet in exact copies from the 3D printer.

According to Kuklinski, these developments will affect the entire market, including art insurers. How to deal with digitalisation and what kind of products his industry would have to develop in this context, he cannot say. However, he sees the expansion of advisory competence and the development of adapted products as very central.

Presenter Peter Grabowski talks about his time at 1Live when, at the beginning of the digital revolution, the music industry simply denied the upheavals until it was overrun by them, only to indulge in doomsday scenarios.

Rolfes insists that art insurance will always remain a people business because it is not about standardised products, but about objects to which customers have an emotional attachment. Therefore, they also expect individual treatment when it comes to insurance.

An irrational element that Rolfes is currently confronted with is the fear of terrorism, which is becoming an issue even at marginal exhibitions in remote locations. Of course, this can be insured, explains Kuklinski. However, major events such as Art Cologne, where enormous values come together, pose a challenge. The art market itself is changing as a result of the perceived or actual change in the security situation. US collectors with their deep pockets are therefore travelling less, which is why Tefaf, for example, has founded a branch in New York.

The legal situation in Germany is indeed a factor of uncertainty for the trade and, according to market participants, mainly benefits logisticians because they have moved large quantities of artworks abroad and stored them there. This, in turn, is potentially harmful to the entire art trade, since art is not usually bought in order to be stored in distant warehouses, not only out of the reach of the state, but in fact out of the state's own reach as well, Henrik Hanstein of Kunsthaus Lempertz points out. According to Kuklinski, there is no policy against losses caused by laws: "An insurer never takes bets.