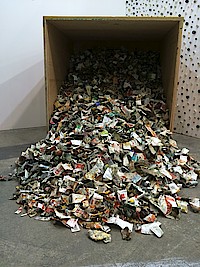 Cologne, 18 April 2016. Art Cologne is one of the leading international fairs for contemporary art and thus a significant barometer for the development of prices. In the year of its 50th anniversary, 218 galleries and dealers from all over the world exhibited in Cologne until the weekend. As always, the values traded were not disclosed. But the trend seems unbroken: prices for contemporary art have more than doubled since 1998. These values are not always comprehensible. This is what makes the subject so sensitive for insurance professionals. Nevertheless, they shy away from openly advocating an objective assessment - even in questions of depreciation after a loss.

How much is a work of art still worth after it has been damaged and restored? Who assesses the reduction in value? What interests are involved? These are all questions that the players like to avoid. Zilkens Fine Art Insurancebroker GmbH put the "hot potatoes" on the agenda of its fifth Art Insurance Talk at Art Cologne. There, a large panel of renowned experts answered questions in front of a good 170 invited guests from Germany, Austria and Switzerland. The discussion made it clear how different the respective interests are.

Insurance markets do not reflect value development Art insurance records a premium volume of 1.7 billion US dollars worldwide. In contrast, Swiss bankers estimate the world's art assets at almost ten trillion US dollars. And the prospect of high returns continues to magically attract investors. As long as interest rates on the capital market remain as low as they are, enormous sums will continue to flow unabashedly into the art market and drive up prices there. At the same time, art and its valuation remain highly emotional and subjective.

The heated development of values is not reflected in the German insurance market. On the contrary: the galloping prices are increasingly causing headaches for the insurance industry. Premium income has been stagnating here since 2010 at around 130 million euros - generously calculated. Why is that? "Competition has become so fierce that the average premium is now cheaper than it was ten years ago," explains organiser Dr Stephan Zilkens, managing partner of the Cologne-based art insurance broker of the same name. In addition, he adds, the exhibition sector is experiencing attrition. With extremely high sums, premiums have plummeted by about 40 per cent since 2010. "The market does not allow for premium increases," confirms Peter Meili, senior underwriter at insurer XL Catlin.

Insurers apparently deal with claims in a similarly customer-friendly manner. "Insurance companies would rather settle a total loss than get involved in a long-term procedure," Kristian Jarmuschek summarises his observations. He is a gallery owner and chairman of the board of the Federal Association of German Galleries and Art Dealers. Abroad, the balance of power is somewhat different. Take the USA, for example: there, insurers also reimburse total loss - but in return, they have the right to take over the damaged work if the value is reduced by 30 per cent or more. In this way, they avoid expensive lawsuits and, on top of that, can achieve a recovery.

US regulation a model for the German market? The players here in Germany do not want to hear about such hardball tactics. "The museums would not agree to that," counters Registrarin Weber of the Kunstmuseum in Bonn, "then there would be no more loan transactions. And art law expert Yasmin Mahmoudi doubts that such a 30 per cent rule would even be legally possible in Germany. "I don't see any need for a change," agrees Dirk Heinrich, Managing Director Axa Art Germany. "In 80 per cent of cases we find a solution quickly and in the remaining cases we come to an amicable agreement after some time." Apparently there are few advocates, like art collector and restorer Sebastian Jacobi: "I'm thrilled with the American model." He is less enthusiastic about the trend towards immaculate art. For him, patina is part of old art. For others, this already raises the question of depreciation.

"In every second claim, depreciation is an issue," reports registrar Weber. Art dealer Thole Rotermund from the board of the Association of German Galleries and Art Dealers confirms that it is also a big problem for dealers. It was not an issue in the past, knows Brigitta Werner, a founding member of the Association of Independent Art Experts. That has only changed in the course of market development: "There is simply more money on the move". Jacobi observes that when it comes to settling claims, the aim is always to get as much money as possible. Completely exaggerated demands, however, probably only come from inexperienced collectors. In this respect, the professionalisation of the market is a regulator.

There are many reasons for an objective benchmark, such as the Schwacke list for second-hand cars or the "Gliedertaxe" for accident insurance. But there are neither reasonable statistics nor mathematical formulas or specialist literature. "We are highly dependent on experts in matters of depreciation," sums up host Zilkens. At least they are free of self-interest. This is less likely to be the case with gallery owners, artists and collectors, and restorers sometimes lack market knowledge. The latter, by the way, may do such a great job: the question of depreciation remains. After all, it is not least the buyers who have to be informed about it. This leaves the issue up to experts and insurers.