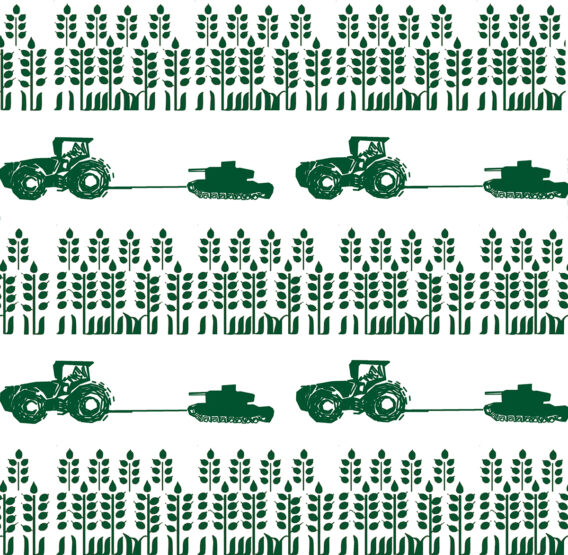 The Ukrainian artist duo Victoria Pidust and Volo Bevza, who actually live in Berlin, are now no longer making artworks but tank barriers in Ukraine, reports Hakim Bishara for Hyperallergic. The project can be supported thanks to their Bonn gallery Judith Andreae here.

Artists at Risk offers support to Ukrainian, Russian and Belarusian cultural workers. An overview with the offers of the helping organizations is provided by this Google document.

The HfBK Bremen offers not only Ukrainian, but also Russian and Belarusian art students the opportunity to continue their studies in the Hanseatic city.

The Ukrainian Institute London has compiled how to help Ukraine and refugees, where to get information and show solidarity.

For Germans who want to take action themselves and head east or take in refugees, Germany's insurance industry's consumer portal has created an FAQ on insurance issues in this context.

One of Germany's central points of contact for refugees from Ukraine is the Central Bus Station in Berlin. The volunteers there have deposited a wish list of urgently needed items at Amazon. When ordering, please make sure to have items delivered to the wish list address (Malteser Hilfsdienst)!

An overview of initiatives where good can be done with the purchase of art has been compiled by Anna Brady for The Art Newspaper. However, one should take a close look at the conditions of the individual campaigns. In Ketterer's online auction "Printastic," for example, which the company "unceremoniously declares a C H A R I T Y A U C T I O N [!]" in a press release, only the buyer's premium goes to a charitable organization. This probably means that the net proceeds will go to the consignor as normal, and the buyer's premium will remain with the auction house.

Atelier Frankfurt and Christie's charity auction on March 23 was met with such a great response that some of the donated works have to be offered in a silent auction. Furthermore, the Instagram auctions of the Viennese art space Waf Galerie (until March 14) and the Solidarity Art Auction of Hessian artists are ongoing.

The two Russian galleries admitted to Liste in Basel are leaving their booths to two Ukrainian colleagues, for whom the fair has waived booth fees, according to Vivienne Chow's research for Artnet.

In the context of a conference, the Minister of State for Culture, Claudia Roth, addressed an address of solidarity to both the Ukrainian and the Russian cultural scene, which dpa summarizes: "There is no finished plan yet, 'because we don't know yet what all will come up, but one thing is clear: there is an incredible willingness, also in the cultural sector, to show solidarity for Ukraine'. The people of Ukraine are fighting for freedom, culture and democracy, Roth said. 'That is exactly what concerns us as well.' Roth argued that cultural relations with Russia should not be completely severed. 'Because, after all, it will punish and hit precisely those who are standing up for democracy with a lot of courage and commitment in Russia and who are also suffering repression from Putin.' One wants to maintain connections to Russia through theaters, foundations or museums. That also applies to town twinning, he said. 'We definitely don't want to burn the bridges we have with Russian democratic civil society.'"

How cultural assets in Ukraine could be protected is so far largely unclear, writes Kevin Hanschke in the FAZ: "As yet, world heritage sites have apparently not been badly hit; and apart from the art museum in Ivankiv, which caught fire along with the works of the painter Mariya Prymachenkobei, hardly any losses of cultural assets have been officially recorded. But Unesco and the International Council of Museum (ICOM) paint a bleak picture of what is likely to happen in the coming weeks. And from the places that were on the front lines right after the war began, there are hardly any assessments of the situation regarding cultural institutions."

Curator and cultural manager Andras Szanto advises at Artnet not to let the cultural bridges to Ukraine and Russia alike collapse: "By all accounts, the war in Ukraine will be a long-duration conflict. And sadly, as we have already seen elsewhere, people's attention spans are short, and likely to shift to other emergencies.Therefore, it is important to prudently calibrate decisions, especially institutional ones, with a view to a longer future. Once a door is closed, it's closed. The question remains: What about the day after? The years after? What about the people on the other side of the door?"

After the Phillips auction house with its Russian owners, Larry Gagosian is now also targeted by Isabel Vincent at the New York Post: "One art world source dubbed Gagosian 'the official art dealer to the Russian oligarchy,' adding that 'the Bond villains he consorts with are dangerous, repulsive and devalue art by their very presence.' Larry Gagosian, 76, has worked with billionaire and Putin confidant Roman Abramovich, whose assets were frozen by the British government Thursday over Russia's ongoing invasion of Ukraine, and Mikhail Fridman, the sanctioned co-founder of Alfa Bank." However, the mega-painter was not alone in his penchant for questionable clientele: "'Gagosian is no different from all the other art dealers who were circling around the money trough of the oligarchs,' said an art world source who did not want to be identified. 'Everybody, including Christie's and Sotheby's were shamelessly courting the oligarchs.'"

Many an institution will also have to do without oligarch money, Susanne Schreiber knows in the Handelsblatt: "Meanwhile, some billionaires are voluntarily withdrawing, whether they are on sanction lists or not. For example, Vladimir Potanin, a very rich art lover, no longer advises the Guggenheim Museum in New York. Advising, of course, means financially supporting the museum's events."

Sabine Spindler summarizes the most important findings of the current Deloitte Art & Finance Report in the Handelsblatt: "In 2020, the ultra-rich of this world owned 1481 billion dollars in art, antiques, antique cars and wines alone. Anyone who owns more than 50 million dollars in total assets is considered ultra-rich. According to a projection, this sum will rise to 1882 billion dollars by 2025 if the economic situation remains unchanged. This forecast holds enormous potential for wealth managers. It looks for value-preserving handling of collections, market analysis, and also tax-advantaged regulations for this non-liquid portion of an estate."

Kevin Hanschke introduces two different apps, The Artists and Wondeur, in the March 12 FAZ. One is designed to give artists visibility, the other to help investors make money: "Also targeting creative talent is Canadian start-up Wondeur (wondeur.ai), but its thrust is different: According to its creators, the company's app will be able to forecast artist careers, based on digital data sets and artificial intelligence (AI). Wondeur primarily wants to target major clients, says founder Sophie Perceval in an interview with Canadian media. Based on how artists are connected to galleries, auction houses and other players, and what sales data is available, Wondeur's AI predicts potential price trajectories, makes risk assessments and creates ratings."

Analyzing the weakening of the NFT market, Miles Kruppa, Cristina Criddle and Tim Bradshaw write in the Financial Times: "By the end of 2021, nearly $41bn had been spent on NFTs - making the market almost as valuable as the global art market. But almost as rapidly, large portions of the market have begun to deteriorate, leaving novice investors with big losses and raising questions about the long term outlook for NFTs. The average selling price of an NFT has dropped more than 48 per cent since a November peak to around $2,500 over the past two weeks, according to data from the website NonFungible. Daily trading volumes on OpenSea, the biggest marketplace for NFTs, have plummeted 80 per cent to roughly $50mn in March, just a month after they reached a record peak of $248mn in February."

Btw there was also an art fair, in Dubai. Lena Bopp visited it for the FAZ. Russia's invasion of Ukraine is said to have been hardly a topic there - as is well known, the Emirates are not participating in the sanctions. Rather, NFTs were important in the desert: "To the many free trade zones that make up the emirate, another is to be added dedicated to the crypto world. Binance, the largest cryptocurrency exchange founded in China and now based in Malta, is reportedly considering a move to the Gulf. A government agency that handles digital already exists." That's where what belongs together grows together.

An example of Emirati indolence at the fair is named by Aimee Dawson in The Art Newspaper: "At the front of the show stands a sculpture in the form of a Matryoshka doll dressed as an astronaut adorned with the Soviet hammer and sickle symbol. I don't understand how these people are so insensitive in these types of situations. For them it is nostalgia but for so many nations [the Soviet period] was a horror story,' [Georgian gallerist Natia] Bukia says. When asked whether Art Dubai thought it appropriate to place such imagery in a prominent location at the fair given Russia's current war on Ukraine, a spokesman said: 'Dubai is home to a wide range of peoples and cultures and we welcome and exhibit artists from all over the world. Marina Fedorova is an independent artist and her participation is not in any way an endorsement of Russia or their actions in the conflict in Ukraine.' Sputnik Partners declined a request to comment."