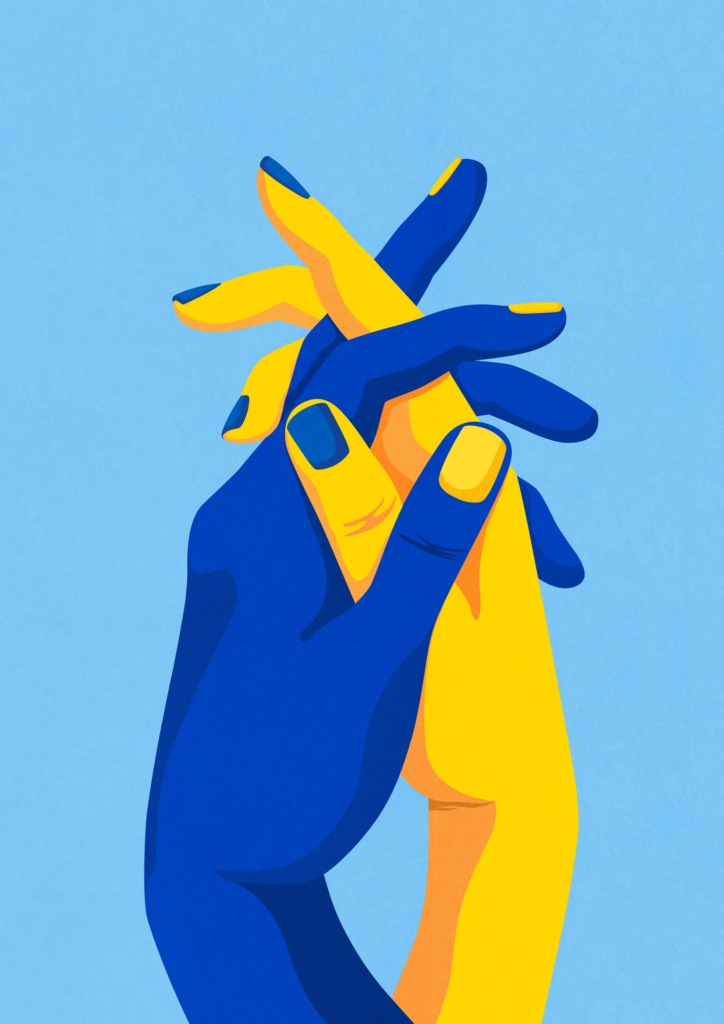 33 artists (including Zuzanna Czebatul, Gregor Hildebrandt and Gert & Uwe Tobias) have donated works for Villa Grisebach's online auction "Artists for Ukraine", which runs from April 1 to 10. All proceeds, including the premium, will go to various initiatives for victims & refugees.

For Artists at Risk, nearly 70 international artists (including Elizabeth Peyton, Luc Tuymans and Rosemarie Trockel) have provided works for an Open Edition. The prints cost 200 Euros each and can be ordered until April 30. Harriet Lloyd-Smith introduces the campaign at Wallpaper.

The Peace for Art Foundation of ArtEast Gallery (Berlin/Kiev) is forwarding donations as emergency aid to Ukrainian artists and institutions. Ursula Scheer introduces the founders and the project in the FAZ of March 19: "Schmidmayr, who became active for the French Cultural Institute in Kiev after the Maidan in 2014 and met Bertrand there, who co-founded the Photo Kyiv fair in 2017, speaks of fearlessness. Even young Ukrainian artists have experienced several revolutions and wars. This shapes them. They have been forced to start over again and again, and they are not afraid of the white sheet or new techniques. They know what fighting for freedom of expression means. The current overwhelming solidarity should not make people forget that a long-term commitment is needed, he said. At some point, he said, the war will end, and no one knows what the invaded country will look like then. We must promise never to abandon Ukraine again, says Cornélia Schmidmayr."

A spot in the reenactment of Marina Abramovic's famous performance "The Artist is Present" on April 16 at New York's Sean Kelly Gallery is up for bid until March 25 at Artsy, benefiting Direct Relief's Ukraine relief, reports Tessa Solomon at Artnews.

Sotheby's and Christie's have cancelled their Russian Sales in London, reports Ursula Scheer in the FAZ: "In view of the ever-growing sanctions lists with names of Russian individuals and companies, the houses apparently considered it advisable to forego events that attract clients from Russia on both the seller and buyer side. A Christie's spokesman said they had a 'responsibility' to respond to 'geopolitical events beyond our control.'" These auctions sell secondary market items, not contemporary art, so the cancellation does not hurt the contemporary art scene critical of Kremlin.

The photography auction market recovered in 2021, according to Arttactic's analysis: "Total Photography sales at Sotheby's, Christie's and Phillips came in at $65.2 million in 2021, up 22.4% from $55.5 million in 2020, but 15.2% lower than pre-pandemic sales total in 2019." Those interested in learning more can purchase the entire report for just 195 British pounds (plus VAT).

What the duopoly of Art Basel and Frieze after the demise of Fiac means for the art market and especially for Paris, asks Scott Reyburn in The Art Newspaper: "A hatred of tax, as much as a love of art, seems to be the key to a successful international art fair. That said, at 5.5%, France does have the lowest level of import VAT on art of any major EU nation, the Paris art scene is resurgent, and the city does have a timeless appeal for luxury travelers. Can Art Basel work its magic in Paris in the same way it has done in Miami Beach and Hong Kong, particularly as RMN-Grand Palais has stipulated the event won't be branded Art Basel, Paris? [...] With London diminished by Brexit, and Berlin being overtaken by property developers and tech bros, Paris hopes it can once again become the capital of the European art world. Perhaps it can. But if Paris wants the world to visit its flagship fair of contemporary and Modern art, it also needs to be on the money."

Those who buy with their eyes instead of their ears currently have good cards, believes Christian Herchenröder in the Handelsblatt: "The comparison with Banksy prices is illuminating. Especially the graphic 'Girl with balloon', which is celebrated as iconic and goes back to a wall painting, has experienced a market inflation. There are 25 'artist proofs', or artist's prints, plus an edition of 125, one of which already fetched £474,800 in 2021. And there is another edition of 600 copies, from which a sheet rose again last year at Sotheby's to 201,600 pounds. For these sums, a collection of old master graphics can be built up with the appropriate connoisseur's eye. [...] Even with Dürer this is possible, for example if one has in mind sheets from the Latin edition of the woodcut series 'Apocalypse' from 1511."

The basic problem with NFTs is that they are so ugly, believes Louis Wise in the Financial Times: "'Right now, I'm browsing on websites and I'm thinking, Oh God,' says art adviser Sibylle Rochat, who runs the Rochat Art Consultancy and is a mentor for the Sarabande Foundation. 'For an art lover like me, it's terrible!' She's not alone. Talk to many art insiders and - if only privately - they'll express horror at the stuff which is, apparently, a hot commodity. Even the younger generation of artists I spoke to find the work bewildering. I would maybe be interested if it wasn't so disgusting,' says one artist in her late 20s, who has shown at several contemporary London galleries. The work looks like the stuff in those weird stores in Camden or Soho where all they sell is magnets.' Rochat is a bit more nuanced. Thanks to her clientele, she has been drawn into the world of NFTs, and helped several collectors buy some, but she remains cautious. I think NFTs make sense as collectibles,' she says. 'In art, we're not there yet.'"

The owners of the Bored Ape Yacht Club have acquired the rights to the CryptoPunk sund Meebits, Susanne Schreiber reports in the Handelsblatt: "Among some CryptoPunk owners who have been involved from the beginning - in the scene language OG, Original Gangster - this meets with rejection. 'They fear a commercialization of their beloved 'underground' art,' reports Hager" [author of the book "Rich with NFTs] . NFTs as underground art and its evil commercialization - sounds like a narrative from an alternate reality branch.

In an original variation of the cum-ex model, an unknown person secured ApeCoins worth about 1.1 million US dollars by borrowing 5 monkey images just for the period when the Bored Aped Yacht Club distributed 15 percent of its virtual currency as an airdrop to NFT owners. The coup was made public by Vishal Chawla at The Block.

If you operate in an unregulated market, you are usually on your own when it comes to problems. This is especially true regarding fraud and theft, warns Riah Pryor in The Art Newspaper: "'When many people hear 'wallet', they're actually thinking about the tool you use to control your wallet-often, this is MetaMask on Ethereum, or TempleWallet on Tezos,' says Christopher King, a co-founder of ClubNFT, a platform and advisory service focused on safeguarding collectors. 'These are more appropriately called 'wallet managers', with the wallet being more of an ID or set of cryptographic keys associated with a blockchain address.' The tokens themselves are owned by that address, but for NFTs, the media files are often stored off-chain. The vulnerabilities of such a system are manifold but, on a fundamental level the move to a decentralised system shifts the onus onto owners to secure their assets."

After Berlin, the "collector" and "patron" Nicolas Berggruen is now apparently exploiting Venice. Monopol reports the acquisition of a second real estate trophy: "After its renovation, the Palazzo will host exhibitions, some of them with works from the investor's personal collection. There will also be symposia and an artist-in-residence program. The artistic director will be curator Mario Codognato, who previously served as chief curator of the Madre Museum in Naples and director of the Anish Kapoor Foundation in Venice." In the Handelsblatt, Susanne Schreiber points out Berggruen's Berlin benefactions, "In Germany, Nicolas Berggruen made headlines between 2010 and 2013 with the acquisition and sale of the Karstadt department store chain. In Berlin, the son of art dealer, collector and patron Heinz Berggruen recently succeeded in freeing his father's museum in Charlottenburg from the tight grip of the Prussian Cultural Heritage Foundation and giving it more autonomy. Occasionally, however, sales from the museum's holdings become known. On March 1, 2022, for example, Christie's was able to auction Picasso's etching 'Le repas frugal' for six million pounds."

Noble is the quest of a group of 50 collectors to establish a code of conduct for ethical and responsible collecting, admits Melanie Gerlis in her commentary for The Art Newspaper. At the same time, she has reservations: "And yet, the more I read the recommendations, the more they irritate me. It seems beyond the code's scope of suggestion to remind that buyers shouldn't do anything illegal: "Sexual harassment [towards an artist] is strictly prohibited," for example. There are also some responsibilities that I don't think necessarily fall to collectors, notably "Holding dealers accountable to pay artists promptly." [...] A call for structural change towards a more ethical environment needs to begin elsewhere in the market system." Why is that? "He who pays, creates," or "He who pays, determines the music," as the saying goes. There is no reason why this should not also apply in the art market.

The expansion into the USA of Bonhams is reported by Susanne Schreiber in the Handelsblatt: "The British auction house Bonhams has bought the well-established US auction house Skinner. Bonhams made the announcement on Wednesday. Skinner is now called Bonhams Skinner." Bonhams has been owned by asset manager Epiris since 2018.

An allegedly authentic possible forgery and a painting declared as a forgery with flimsy arguments - Berlin lawyer Mareile Büscher and journalist Jan Hendrik Geschke explain in an interview with Matthias Ehlert and Ralph Gerstenberg for WELTKUNST (free registration) how the Fondazione Lucio Fontana makes a brutta figura with its expert opinions: "We cannot oblige the Fontana Foundation to include the painting in the catalog raisonné (it would have to take this step voluntarily). But we can and hopefully will achieve that the Fontana Foundation may no longer claim that the Munich painting is a forgery. The case is currently before the Higher Regional Court in Munich. The legal issue is, among other things, whether the designation of a work of art as 'false' is a statement of fact or a so-called value judgment. The art market perceives statements by the Fontana Foundation as unalterable fact. Without a certificate of authenticity from Milan, no auction house will take a work by Fontana to auction. Therefore, this case has fundamental importance."

For now or later: a list of 100 contemporary (living) Russian artists to know has been compiled by Oleg Krasnov Irina Osipova Darya Kurdyukova Yelena Fedotova Dmitry Smolev and Igor Grebelnikov for Russia Beyond.