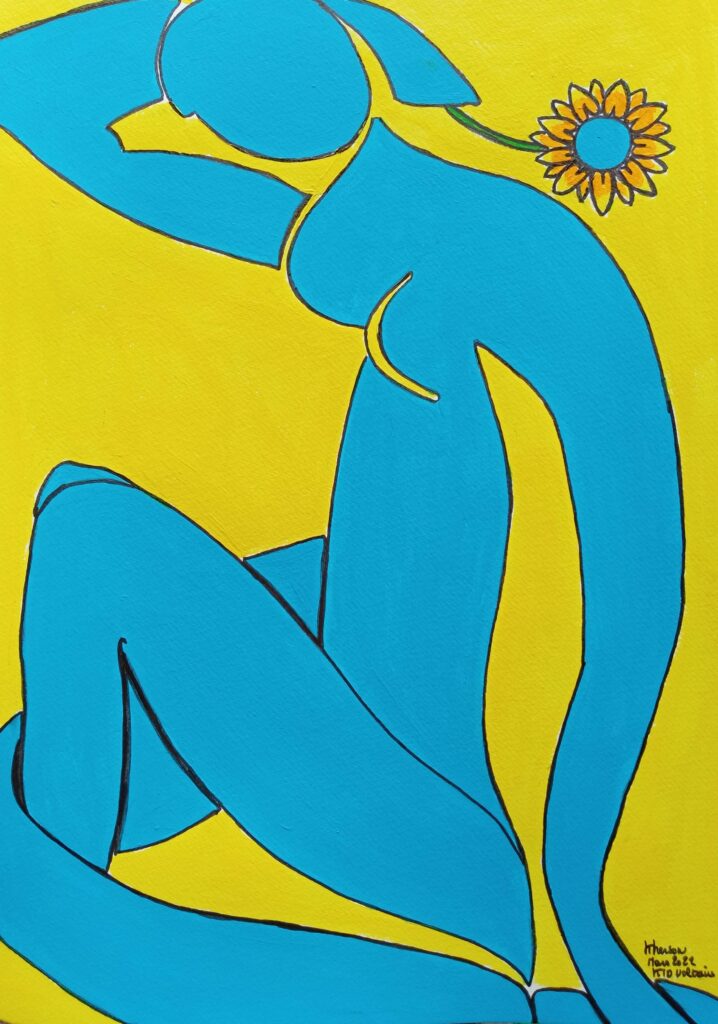 Vienna's Christine König Gallery will auction 22 works by Ukrainian artists on June 17 through the Dorotheum to benefit Ukraine: "The 'KIDS' SHELTER' project supports the renovation of a shelter and school in the Transcarpathian mountains near the Slovakian border for families who have lost their homes and are uncertain about their future. Auction proceeds will secure a safe place to live and learn for up to 40 children." No buyer's premium, buyer's discount or other fees will be charged by the auction house.

According to a press release, Art Basel is committed to Ukraine in a variety of ways, including a donation of 110,000 Swiss francs and support for a performance by Pussy Riot on Tuesday at the Basel Kaserne.

Art Basel head Marc Spiegler answered some pleasant questions for Ursula Scheer for the June 11 FAZ, including one about the current boom in the art market: "I think the art market is really strong right now for both good and bad reasons. Among the good reasons is the diversity of voices that are now being absorbed. That's why there's also greater diversity on the part of collectors. This mutual reinforcement is unleashing an important dynamic. Among the bad is that during the pandemic, we've seen a further concentration of wealth at the top end of society. That's not good for society, but it means more people can collect art. We hope that much of the accumulated wealth will flow back into the arts in terms of private support, to galleries, artists, and institutions." Here, however, the poet is mistaken. By no means can "more people collect art." More people can collect art at the price level of Art Basel and beyond.

While Sprüth Magers is expanding to New York, Tokyo is about to get a new fair, reports the FAZ : "The fair is founded by Magnus Renfrew, co-founder of Art HK and other art fairs in Asia, with Tim Etchells and Sandy Angus." The group thus has supremacy in Asia, at least in terms of numbers. In various constellations, the parties involved run fairs in Taiwan, Hong Kong, India and Singapore, among other places - as well as in Europe and the United States. This looks like unexpected competition for Basel.

With preliminary sales of 27 million euros, Ketterer in Munich has taken the lead among German art auctioneers, Sabine Spindler announces in Handelsblatt: "Collectors and art investors were in an excellent buying mood on Friday evening at Ketterer's auction of works of classical modern as well as post-war and contemporary art. Loss of confidence in the art market looks different. It was not only the five-million-franc proceeds that led to the evening's dazzling results. The willingness to invest in the art of the second half of the 20th century, which is just becoming classical, in the six-figure price range is astonishing. Works by painters and sculptors firmly inscribed in the general canon experienced notable increases."

Concluding figures from Villa Grisebach are provided by Christian Herchenröder in the Handelsblatt: "More evenly than usual, the bids were distributed among phones, internet and hall. Around 20 million euros were raised, 9 million of which in the auction of selected works and 4.1 million with the Colsman Collection. The total result for the first half of the year, including online only and free sales, is a gross 25 million euros, according to the house. The evening auction with 32 works went largely according to plan. Although the main lot, Max Pechstein's painting 'Russian Ballet', created in 1909 in the best creative phase, without resonance in the hall and by a single telephone bid with gross 2.4 million euros just reached the lower estimate. According to the auction house, it is going to a private collection in Berlin."

The middle D from Death, Debt, Divorce give the old master market supply, knows Barbara Kutscher from New York in the Handelsblatt: "Parts of Saieh's group of companies ran into economic difficulties during the pandemic and had to file for bankruptcy protection last summer. Therefore, 54 works of the Alana collection are now looking for new owners at Christie's in a 'single owner sale' on Thursday morning. A total of $30 million to $50 million is expected on June 9."

Other collecting areas also seem to be experiencing a glut of money right now. The FAZ reports a sixfold auction record for a camera, and again it is a Leica: "One of these rare apparatuses - the 0-series No. 105 - has now been auctioned at the 40th Leitz Photographica Auctionam Leitz Park in Wetzlar for 14.4 million euros including buyer's premium. The estimated price was two to three million euros. The 105 thus breaks the world record for the most expensive camera of all time."

An overview of the serious NFT art scene has been compiled by Charlotte Kent for Artnews.

The antiquities scandal at the Louvre seems to be taking on truly breathtaking dimensions, according to Olga Grimm-Weissert in the Handelsblatt: "Police and judicial authorities are on the trail of an international ring suspected of dealing in artifacts from illegal excavations. These are said to have reached Hamburg in a roundabout way. There they were restored and provided with - presumably forged - certificates of origin. According to the police, they are said to have been either conveyed to the Louvre Abu Dhabi via France or distributed via auctions and dealers. Because [former Louvre director Jean-Luc] Martinez explicitly mentioned the purchase of the princess sarcophagus in Germany five years ago in Abu Dhabi, this star object could possibly have come from the Hamburg dealer Roben Dib. Dib has been in custody in France since March. He allegedly worked with the Semonian family of dealers.Investigators also came across a pair of Parisian experts, Christophe Kunicki and Richard Semper. The duo, who specialize in Egyptian archaeology, worked with the auction house Pierre Bergé & Associés (PBA). PBA's experts and auctioneer sold directly to the Louvre Abu Dhabi. These gentlemen have now also had to answer to the French judiciary."

That's when you want to give something away, and then no one wants it. The Tate is planning to return a Francis Bacon archive to the donor, reports Angelica Villa at Artnews: "In April, reports of the ongoing row escalated when it was revealed that doubts had been cast by scholars over Joule's donation, known formally as the Barry Joule Archive (BJA). Last September, the Bacon Estate published Francis Bacon: Shadows, which quotes a former Tate curator Andrew Wilson as saying 'the hand/s that applied the marks to the material may not have included Bacon to any substantial degree'. Joule said he intended instead to donate a second grouping of Bacon's works-around 150 drawings, 10 paintings and other archival materials including documents and audio recordings-to the national archives of the Centre Pompidou in France after falling out with the London institution and had already begun negotiations."