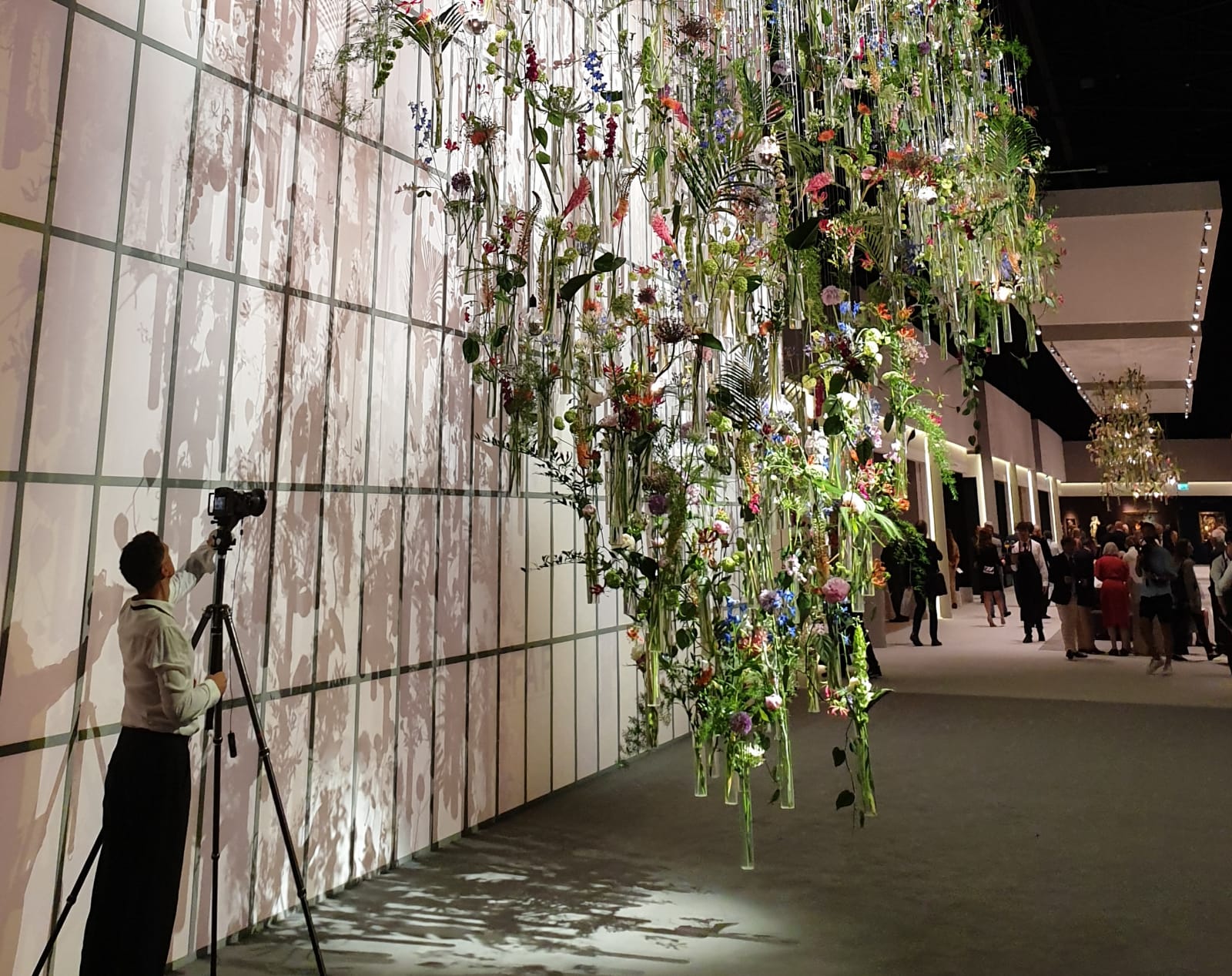 The Bristish Council and the Ukraine Institute are launching a nine-month Season of Culture in the UK, reports Martin Bailey in The Art Newspaper.

Berlin's ArtEast gallery is organizing an exhibition of Ukrainian art in Paris on June 29 and 30, with all proceeds "benefiting the artists and the French creative and production studio Les Monstres for the making of a documentary film about contemporary Ukraine."

On an unusual date, with a shortened runtime and fewer exhibitors, the Tefaf in Maastricht is once again setting up a temporary museum, which Georg Imdahl visited for the FAZ: "'Cross collecting' may be on everyone's lips right now, says Hidde van Seggelen, director of the Maastricht art fair TEFAF and gallery owner in Hamburg, "but it's been around for decades at our fair." Indeed, "The European Fine Arts Fair" is the appropriate place for it. [...] Auction houses have jumped on this bandwagon, pushing old master works into the spotlight in the modern art segment, spurring amazing proceeds."

I was in Maastricht for the Handelsblatt and Artmagazine .

Between Art Basel and Tefaf, the Brafa in Brussels is somewhat lost in the media. Unjustly, finds Alexandra Wach in WELTKUNST (free registration), because the fair "reliably presents itself in eclectic openness to genres, reaching through all centuries and leaving hardly any object out. The offerings range from a painting by Frans Hals at Amsterdam's Douwes Fine Art gallery to Native American headdresses at London's Finch & Co to a Persian ibex sculpture, dated to 1000 B.C., in the luggage of the newly added Parisian gallery Kevorkian. Finally Brafa again, not a few must have thought".

It seems that the trade in graphic art is also slowly picking up again, as can be seen from a report on the Bassenge auction in Berlin by Christian Herchenröder in the Handelsblatt: "With gross proceeds of around 6 million euros, the spring auctions of the Berlin auctioneer Bassenge were an unqualified success. The total estimate had been 4.2 million euros. The trade, which had practiced abstinence for two years, was back in full force. 'There was pent-up demand from Americans, Brits and French,' emphasized company boss David Bassenge in an interview with Handelsblatt. 'The overall knockdown rate was over 80 percent."

Thomas W. Kuhn perceived the traditional Grosse Kunstausstellung NRW as a "broad-based art market corrective" for Artmagazine: "In fact, the large number of good artists:inside based in the Rhineland is out of all proportion to the manageable number of galleries, which can only offer an interface to the market for the smaller part. After all, the local universities between Münster and Essen, Cologne and Düsseldorf are constantly producing new talent." In fact, the event, which in the past often came across as rather hobby-like, seems to have become significantly more professional. There is even an appealing online catalog with purchase and reservation options.

Artist careers today are only something for the children of rich people, Martin Herbert complains at ArtReview: "Yet what's not seen in this picture, in the present day, are all the talented young people who weigh up their burgeoning ability against the cost of art education and what comes after, recognize they can't afford it, and give up. What is seen, not infrequently [...] is a lot of affable, well-composed, of-the-moment mediocrity by people who could afford it, whose parents could afford it." The insight is not new, but is usually only addressed so clearly behind closed doors.

Hong Kong is obviously a good marketplace for speculative goods, according to Angelica Villa of Artnews: "As always, works by young contemporary artists, to whom art speculative buyers are known to be drawn, remained in high demand during Phillips Hong Kong sale. Other works by established names like George Condo, Lee Ufan, and Pierre Soulages were among the highest sellers of the night, going for prices above $1 million [US]. But Bull and Abdella were among the handful of young artists who made their auction debuts in Asia this week. Entrances like these into Hong Kong sales typically spur attention among bidders. In a statement following the sale, Phillips Hong Kong specialist Isaure de Viel Castel, said the house aimed to put a spotlight on artists of a 'new generation,' who she described as 'ultra-contemporary.'"

Magnus Resch and NFTs seem made for each other. No wonder there is now a book by him on the subject. Shanti Escalante-De Mattei talks to him about it at Artnews: "What artists are realizing is that they can be successful without galleries, 50/50 doesn't cut it anymore. Artists can act as true entrepreneurs, finding and creating their own customers, their own distribution channels. We've seen a lot of artists who didn't make much money three years ago are now very wealthy because they took their own career into their own hands, rather than relying on anyone else. Jen Stark and Justin Aversano are good examples." If you Google these two names, you'll quickly realize that all this has little to do with art, but rather with how you can (supposedly) make money quickly.

The move of Noah Davis from Christie's to CryptoPunks is not under a good star, as Shanti Escalante-De Mattei reports at Artnews: "The day before NFT. NYC kicked off this week, the Web3 world saw a seismic shift - NFT guru Noah Davis announced that he was leaving Christie's, where he helped organize Beeple's record-setting $69.3 million Everydays sale, to head NFT collection CryptoPunks, which was bought by Bored Ape Yacht Club parent company Yuga Labs this past March. Rumors of insider trading spread quickly at the Web3 conference as observers of the space noticed that trading volume for the CryptoPunks collection spiked over 957% in the 24-hour period (relative to the previous 30-day average) before Davis's announcement." Regrettable exceptions just happen even in the most reputable industries.

British Customs is starting to impose fines on art dealers for non-compliance with money laundering rules, reports Riah Pryor in The Art Newspaper.

The unsatisfactory legal situation regarding the restitution of artworks poses many new problems, explains attorney Zacharias Mawick in WELTKUNST (free registration): "The poorly regulated and therefore unpredictable legal situation thus contributes to the fact that the descendants of the victims are once again deprived of part of the property to which they are entitled. As a result of the legislator's omissions, it is then above all the lawyers of the disputing parties who earn money - and in principle they cannot be blamed for this. In order for justice to be done to the descendants of the persecuted, law and morality should be brought back into harmony through a law that creates unambiguous and judicially enforceable restitution claims of victims and compensation claims of restituting private persons against the state as successor to the state of injustice."

The Orlando Musuem of Art has lost a controversial Basquiat exhibition entirely to the FBI, Brett Sokol and Matt Stevens report in the New York Times. An AFP report summarizes the report in German: "The exhibition, which has been running since February, had featured previously unknown alleged Basquiat works, according to a report in the 'New York Times'. According to the newspaper, one of the pictures painted on cardboard bore a package imprint on the back, which was not in common use until 1994 - six years after the artist's death. According to the Times, FBI investigators also came across inconsistencies in the information about the paintings' alleged previous owner. "