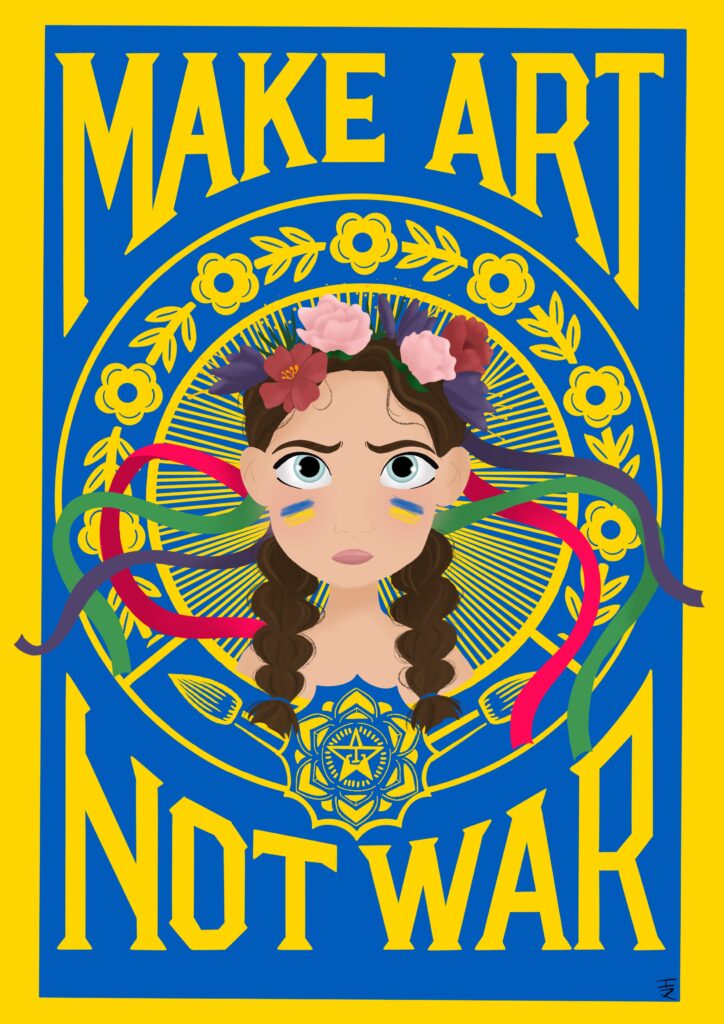 Gerhard Richter in particular has generously stocked the Charity Art Cologne webshop for the benefit of Ukraine. Monopol calls the ongoing initiative to mind.

With Postcards for Ukraine, Brita Sachs presents in the FAZ of August 20 another initiative with which the art scene is organizing humanitarian aid for Ukraine: "The idea of the artists' postcards was brought to [gallery owner Johannes] Sperling and his sister Franziska Le Meur by their desire to do something for those suffering in the war in Ukraine. 'Thinking about them makes you feel so powerless. We really want to help,' Sperling says in conversation. She says it's 'frightening how quickly this war became normal after just six months. We want to do something that will keep people thinking about what happened in Ukraine for a long time to come.' The initiators want to offer around three hundred cards in total. Currently, one is presented online about every other day. From September on, this will even happen daily - to be viewed on Instagram as well as in a virtual showroom." However, the hurdle for readers is relatively high. Because neither the corresponding Internet address is mentioned nor the Instagram account of the initiative misspelled in the newspaper.

Felix Leitmeyer visited a place for Ukrainian artists to live and work in Berlin's best area for Monopol: "Building a network is one of the UCC's most important goals. According to the project's initiator, real estate expert Maya Miteva, the UCC is to become a kind of social hub and mini cultural center: 'It's not enough for artists to have a place to live and work,' she says.'Only with a network, which they usually build up over years, can they make a living from their work.' With this knowledge, she says, when the first refugees arrived in Berlin at the end of winter, she developed the idea for the UCC. With her business partner Anaïs Cosneau, she had come across the brothel at the time. Miteva grew up in Bulgaria, her parents lived in Ukraine, which also gives her a connection to the country. She had launched an 'open call' for the project. ' Hundreds of people came forward. Through a selection process with a jury and the help of Anastasiia, who was part of the project very early on, we were able to choose the current residents.'"

Helping sometimes isn't easy. A benefit exhibition organized by Russians in London to benefit Ukraine has now been cancelled, Sophia Kishkovsky has learned for The Art Newspaper: "London's Saatchi Gallery has cancelled an exhibition of Ukrainian contemporary art after a social media outcry over it being organized by the Russian banker and art collector Igor Tsukanov, with cultural impresario and fellow Russian Marat Guelman as a consultant. The Ukrainian Way had been scheduled to show 100 Ukrainian artists at the gallery from 3-11 September accompanied by an auction of physical works and NFTs. With Kyiv's M17 Contemporary Art Center (M17 CAC) listed as a partner, a press release claimed that all proceeds would go to 'charities supporting Ukrainian arts and culture including the Art for Victory Fund and the Ukrainian Emergency Art Fund.'"

A new charity business model is presented by Annika von Taube at Monopol: "See The Stand, an offshoot of Sotheby's that sources its lots directly from artists' studios and presents them as part of curated convolutions. The goal: to let artists themselves determine what they want to submit to an auction and to give them the main share of the proceeds (incidentally, Berlin's Direkte Auktion format works in a very similar way). This is a principle that would of course work without digitization, but it follows digitization-driven trends. Online trade strives to cut out the middleman, in this case collectors, galleries or dealers, and to gain direct access to customers." So, under the guise of charity, the aim is arguably to subvert the rehearsed interplay between producers, intermediaries and buyers. However, The Stand is not a Sotheby's offshoot, but the child of Robin Woodhead, the company's former CEO, and other investors.

Dark looms the depression that Sebastian C. Strenger sees befalling the art market for WELTKUNST (free registration): "The middle class of galleries, on the other hand, already has to worry about spiraling costs in the areas of transportation and heating. For the small galleries, the market-clearing trend that began even before the Corona pandemic will inevitably gain momentum. And artists will continue to be the weakest link in the chain and largely unprotected from the vagaries of commerce. In short, the impacts are getting closer."

Sabine Spindler and Susanne Schreiber investigate the entrepreneurial activities of the Munich auctioneer Robert Ketterer in their detailed portrait in the Handelsblatt: "Ketterer does not want to give away the names of his other companies. But they can be found in the commercial register. Experts Art Service GmbH, for example, offers 'transport, restoration, framing, inventory documentation, research, appraisal and sale of art objects'. Another slimly staffed company combs the bidding pages of competitors to 'expand the value chain' beyond service. If an underestimated relevant work of art by Fritz Winter or Ernst Wilhelm Nay is discovered, a 'sleeper', the boss personally decides on the purchase and price limit". This is where things can get a little borderline: "It is not forbidden to sell so-called own goods in one's own auction house, but it is strictly regulated, Christina Berking explained to Handelsblatt when asked. The lawyer for the Federal Association of German Art Auctioneers points out that labeling is mandatory above a certain limit and that the auctioneer, his relatives and employees are not allowed to bid at in-house auctions. However, the Munich auctioneer does use one loophole. In the catalog, neither the source of sale nor Ketterer's consigning side company appear in the list of provenances, but only an indication of provenance before entering the market."

Hubertus Butin asks for the FAZ how and when auction houses check the authenticity of consigned art works - or not: "Fraudsters often consign their works shortly before the closing date. Then there may not be enough time for intensive investigations and research. Analyses in art technology laboratories are particularly time-consuming. There, forgeries can be unmasked using scientific methods. However, such analyses are rarely commissioned by auction houses, even for valuable works, as Bassenge, Christie's, Grisebach, Karl & Faber, Ketterer and Van Ham confirm when asked. They only commission laboratories when there is doubt about authenticity or questions that have arisen cannot be answered either by the auction house or by art historians and conservators who have been consulted."

Hand drawings are a collecting field on the rise, believes Stefan Weixler at WELTKUNST (free registration) : "Perhaps there is a connection between the increasing interest that the sector has been attracting for some years now and the noticeable permeability of this discipline, which is identity-driven in the best sense of the word, and which, as a humane primal activity of maximum accessibility, allows every small child to experience dot-dash-dash, and connects ethnic groups, societies and generations - all the way back to the Upper Paleolithic. But be that as it may, hand drawings are on the upswing. A steadily growing number of specialized fairs such as 'Master Drawings,' 'Salon du Dessin' or 'Paper Positions' and auction sales of $2.8 billion in 2021 (Artprice) speak for themselves."

Frank Stella is a strong supporter of resale rights in the U.S., which he is using in a smart move both for this cause and to disseminate his work. Shanti Escalante-De Mattei reports for Artnews on his collaboration with the Artist Rights Society, "The 22 resulting NFTs are sleek, grey 3D objects which include some of recent Stella designs. The Geometries XXI (2022) NFT is clearly modeled after Stella's Fat 12 Point Carbon Fiber Star (2016), a spheroid sculpture with 12 points. Each NFT in the series will be sold for $1,000 on the Arsnl site. The NFTs are offered in editions of 100, and they come with an exciting perk: 3D printing instructions that only holders are have the right to use to make their own Stella sculpture. Stella said that 3D printing allows for infinite reproducibility. 'It's an affordable and flexible way to own a Stella,' said [ARS founder Theodore] Feder. 'If you want to spend $100 printing a small one for your desk or $100,000 printing it large for your lawn, you can do that.'"

The introduction of the resale right in New Zealand is reported by Shanti Escalante-De Mattei at Artnews: "The Artist Resale Royalty Scheme guarantees artists a flat 5 percent royalty fee when their works are sold in the secondary market in the 80 other nations where such resale rights exist, among them France and the United Kingdom. The scheme is to be implemented as a part of New Zealand's new trade agreement with Europe and the U.K."

Pauline Herrmann investigates how museums are dealing with climate change and rising energy costs for Monopol: "For a long time, the guidelines of the International Council of Museums (ICOM) applied: They stipulate a humidity of 50 percent and a room temperature of 20 degrees in museums. In the meantime, museums increasingly rely on so-called seasonal gliding. "Depending on the outside temperature, the room temperatures in the exhibition rooms with works of art from the collection rise to around 25 degrees in midsummer; in winter, on the other hand, the temperatures in the areas accessible to visitors are around 20 degrees," says Norbert Kölle, managing director of the Hamburger Kunsthalle. Seasonal

sliding lowers energy use for air conditioning somewhat, but still doesn't seem to be the norm in the industry, in part because lenders and insurers won't allow it."

Johannes Wendland experienced civic engagement in the flat countryside when he visited collector Ingrid Roosen-Trinks for the Handelsblatt: "Anyone who wants to visit the exhibition can get an appointment directly from the collector - and also a guided tour. Ingrid Roosen-Trinks guided around 40 visitors through the first presentation in the spring. About half of the visitors were classical art audiences, but the other half were people from the region who normally have few or no points of contact with contemporary art. 'This is very important to me. I want people to be able to get uninhibited and low-threshold access to art and culture here, just as I used to aspire to do at Klassik Radio.'"