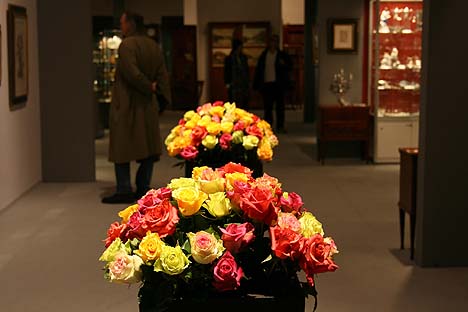 Where Have All the Flowers Gone? Goodbye Cologne Fine Art; Foto Stefan Kobel

The traditional Cologne Fine Art (Westdeutsche Kunst- und Antiquitätenmesse) is history. Werner Remm reports first for Artmagazine: "The Cologne Fine Art as an independent fair will no longer exist. A new section called Art + Object within Art Cologne will offer art from antiques to Design and non-european art. Contemporary art, which until now has been more of a nuisance than a serious offer to collectors at Cologne Fine Art due to its lack of quality, will thus fall to Art Cologne alone. As curator, fair director Daniel Hug is assisted by art dealer and curator Sebastian Jacobi, who himself exhibited for the first time at Cofa in 2019." I obtained a statement on this from Daniel Hug, director of Art Cologne and Cofa, for the Handelsblatt.

It's hard to deny that Los Angeles has become one of the centers of the international art market. The Frieze branch there is thriving, as the opening report by Deborah Vankin of the Los Angeles Times demonstrates: "Speaking of expansive: The Frieze tent itself [...] is 40% bigger than in previous years. It houses 100 exhibitors representing 17 countries (there were 77 last time, in 2020). Frieze expects about 35,000 attendees over the total of four days. All the expected blue-chip galleries were there, including Blum & Poe, David Kordansky, Sprüth Magers and Hauser & Wirth. But the East Coast galleries moving into L.A. were generating much of the buzz. There are at least eight of them, including Sean Kelly, Lisson Gallery, Pace, the Hole, Karma, Albertz Benda, Danziger and Sargent's Daughters in collaboration with Shrine." David Zwirner also joins the ranks, notes Robin Pogrebin in the New York Times: "With the new 15,000-square-foot project, Zwirner joins his fellow mega-galleries, which have long had a presence in Los Angeles: Gagosian, which opened in 1995 in Beverly Hills, and Hauser & Wirth, which opened in the downtown arts district in 2016 and is opening a second space in West Hollywood next fall. Earlier this month, Pace announced that it was merging with the Los Angeles gallery Kayne Griffin to open a new California home in Mid-Wilshire in April; the gallery also has a branch in Palo Alto."

As a summary of the week in Los Angeles, Artnews' coverage is largely made up of images, which sees the art scene there as a stomping ground for celebrities or a space for BIPoC activists and the Frieze as well as the satellite fair Felix as a catwalk. May not be missing of course also the ten best booths and a selection of expensive sales.

The hype surrounding NFTs has not broadened the public's understanding of digital art, but rather narrowed it, claims Christiane Paul in The Art Newspaper: "The NFT boom has reduced the public image of digital art, which covers a broad range of creative expression, to individual reproducible digital images, animated gifs or video clips-the standard forms of digital collectibles and meme culture. There may be a segment of the crypto world that, through NFTs, has discovered the breadth and history of digital art and started supporting it, but that segment seems to represent only a small overlap in the Venn diagram of traditional art collectors and NFT collectors." This would probably also invalidate one of the main arguments of the NFT apologists.

By the way, Melania Trump seems to have won the auction of one of her NFTs herself, reports Bloomberg.

While porcelain and ceramics are in vogue as a material among young contemporary artists, older studio ceramics still largely lead a shadowy existence on the art market. But that seems to be changing, at least at the top, Sebastian Preuss has found out for WELTKUNST (free registration): "The year 2021 catapulted Rie and Coper into completely new realms. As with Meissen porcelain, the occasion was a special collection. John Driscoll, owner of Driscoll Babcock, New York's oldest art store, devoted himself to British studio ceramics for private pleasure, contenting himself with only choice pieces. The auction after his death, jointly organized in London by Phillips and Maak, an auction house specializing in ceramics, triggered a veritable buying frenzy in November. Three of Coper's masterpieces found new owners for 520,000, 440,000 and 410,000 pounds; eight other pieces by him fetched more than 100,000 pounds. Studio ceramics had never seen such knockdowns."

The affair surrounding the alleged Kunsthalle Berlin, with its entanglements of private and public interests and finances, will probably not be so easily sat out. Not only does Niklas Maak follow up in the FAZ. At the beginning of last week, an open letter with several hundred signatories was sent to politicians: "It's about tax money, public property and the political mandate. Is an assignment of land-own real estates by a leaving governing mayor after landlord kind, blessed by a project GmbH assigned in responsibility and order of the citizens of Berlin city government, at all legal? How can it be that the business conduct of Smerling's association is financed with Berlin tax money by the Senate Administration without public discussion and examination? Isn't at least the principle of equality broken in the city of Berlin, when elsewhere the temporary allocation of studios is denied, but here an area of 8000 m2 passes into private hands without public discussion and with the assumption of 50% of the ancillary costs without examination?"

Walter Smerling is interviewed by Nicola Kuhn and Birgit Rieger for the Tagesspiegel of February 18: "We must keep the financial risk as low as possible. Public-private partnership is good, after all, if it is done at eye level. We can talk about the operating costs. I offer Tempelhof Projekt GmbH to take over 100 percent of them."

Birgit Rieger also reports on a panel discussion on the topic in the Tagesspiegel: "The point is that things like this keep happening in Berlin: Politicians make decisions and don't involve the urban society. Yes, you could say that politics is overwhelmed. With this city and its heritage. With its great but dilapidated real estate. With major design tasks. What will become of the ICC, which has been empty for eight years? What is to become of Tempelhof?"

The digitized hand catalogs of the Munich auction house of Hugo Helbing are now accessible online. A stroke of luck, judges Susanne Schreiber in the Handelsblatt: "These explosive seller names are now digitally retrievable. Let's assume that a family knows that its ancestors owned a Spitzweg painting until the 1930s. She can now search for catalog descriptions under Spitzweg in the full-text field, but she can also search for the family name in the consignor lists. [...] Changes of ownership can now be clearly documented for the first time in many cases. Thus, these digitized lists have political relevance for numerous upcoming restitution proceedings."

A Western museum can hardly behave any more stupidly than this. The joint project White Cube Gallery in Lusanga in the Democratic Republic of Congo wanted to borrow the statue of a Belgian colonial officer from the Virginia Museum of Fine Art, which refused. The African gallery with its director, the artist Renzo Martens, an NFT of this statue to draw attention to the situation whereupon the U.S. institution accused the Africans of copyright infringement. Daniel Bouffels tells the story in the Guardian.

Museum stores have long established themselves as taste-free zones of cultural industry, but where wokeness strikes, even British humor doesn't stand a chance, as London's Courtauld Gallery had to efray with its Van Gogh gimmicks, explains Gina Thomas in the FAZ, "because in its store it carried, among other things, an eraser in the shape of an ear, soap 'for the tormented artist who delights in foamy blisters,' and an 'emotional first aid kit' with advice for twenty psychologically difficult situations. The museum felt compelled to withdraw both the eraser and the soap from circulation, and to announce with embarrassment that it took mental health 'extremely seriously.'"

Censorship then, now and from different directions is illuminated by Philip Meier in the NZZ: "Whoever can empower himself to exercise censorship has the power. And that is exactly what today's cancel culture is about. It too censors art. In doing so, however, it pretends to act not from a position of power, but of powerlessness. Its modus operandi is victim status. [...] Sometimes, however, the censoring ray of ban comes from the side - in this case from the outside right: Nationalist circles successfully imposed their will at the last Aichi Triennale, Japan's renowned international art event."